The Search for Water (Wismar and Hamburg)

Prior to leaving for Berlin we had engaged in an absurd amount of deliberation about the other places we would go to use up all the trips on our rail pass. But we were also strapped for time. So, we flirted with cross-border travel like Copenhagen to the north, Luxembourg to the west and Prague to the east. In the end, we settled on Wismar. Perhaps a bit less exotic but much more doable. This made sense since we were both interested in the north coast of Germany and I wanted to see the Baltic sea (preemptively I will tell you that the simple reason was that I’d never seen it before). Besides, A.'s family told us Wismar was a beautiful and tiny (pop: 45,000) old city, UNESCO ranking and all. So we woke up on Monday morning and bid farewell to D. and Berlin and boarded a local train going north.

Wismar was a flourishing Hanseatic town during the 13th and 14th centuries and is now a preserved (minor) tourist destination. The old town was organized around a markt where you can buy local fruits and vegetables and an assortment of other crap. According to Wikipedia the markt place is "surrounded by elegant buildings with styles ranging from 14th-century North German Gothic to 19th-century Romanesque revival." Many of the ones we saw were restored 17th century buildings: 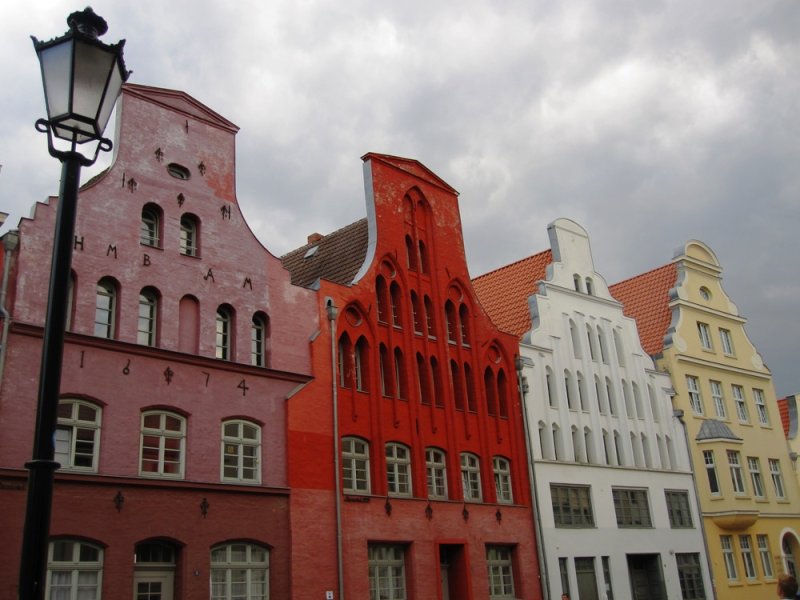 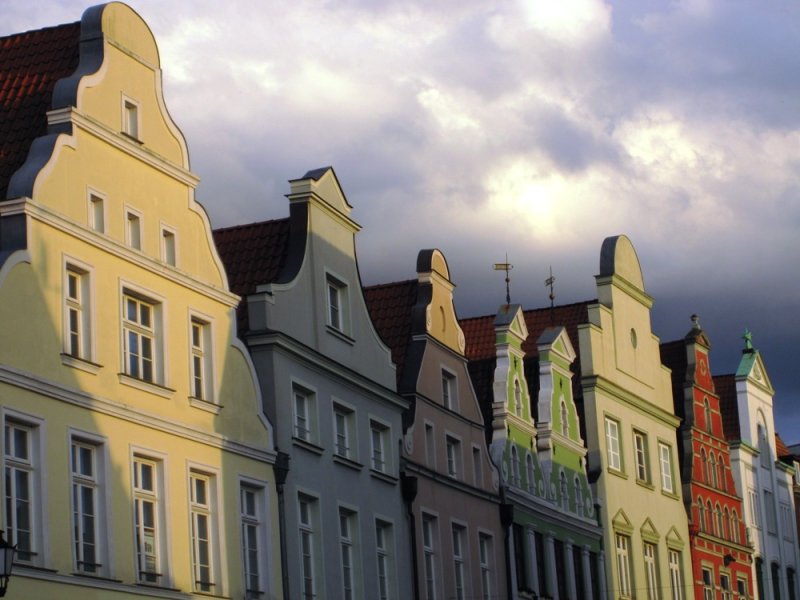 This is one of my favourite pictures: 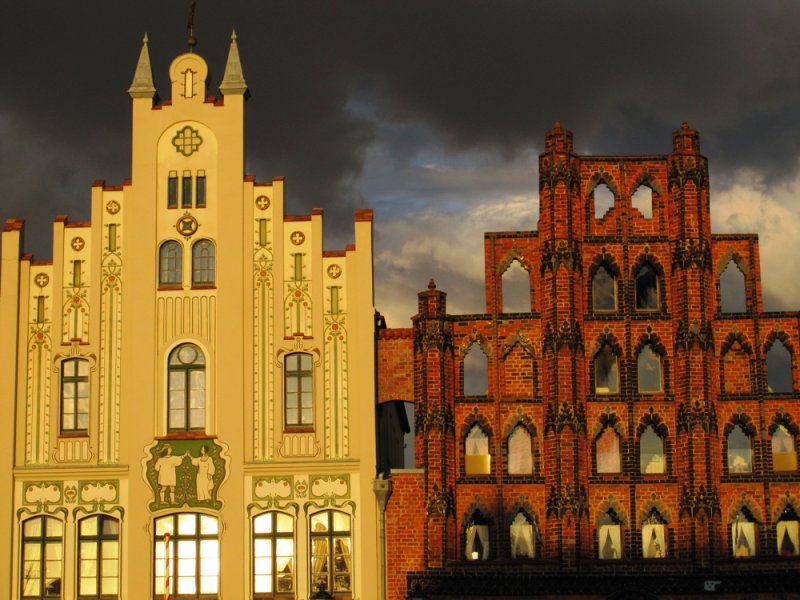 The downtown of Wismar is beautifully preserved, neatly kept cobblestone and fresh coats of paint. A far cry from the derelict church in Prenzlauer Berg. That being said, not all of them were perfect, as you can see from A.'s artistic shot: 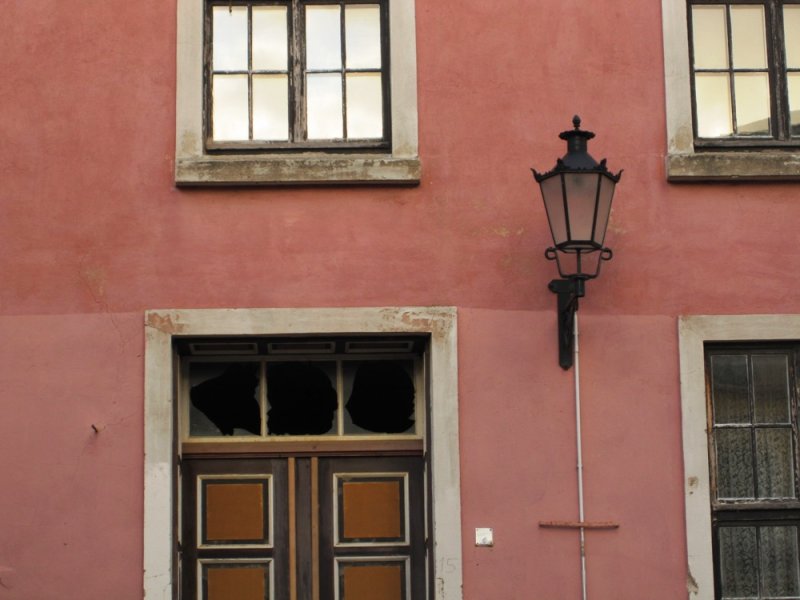 There were other funny and idiosyncratic elements of the town, like what we dubbed the "ode to pretzel": 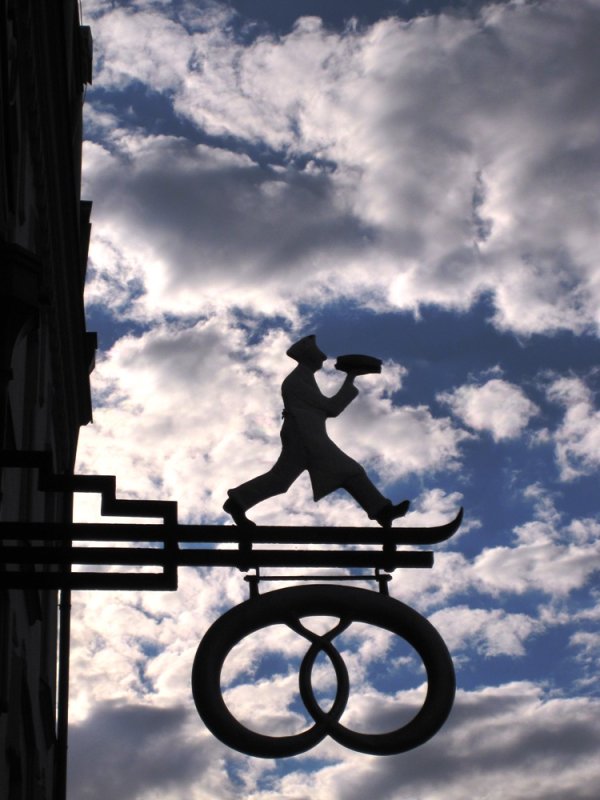 Or this funny bronze pig (which was one of four canal posts): 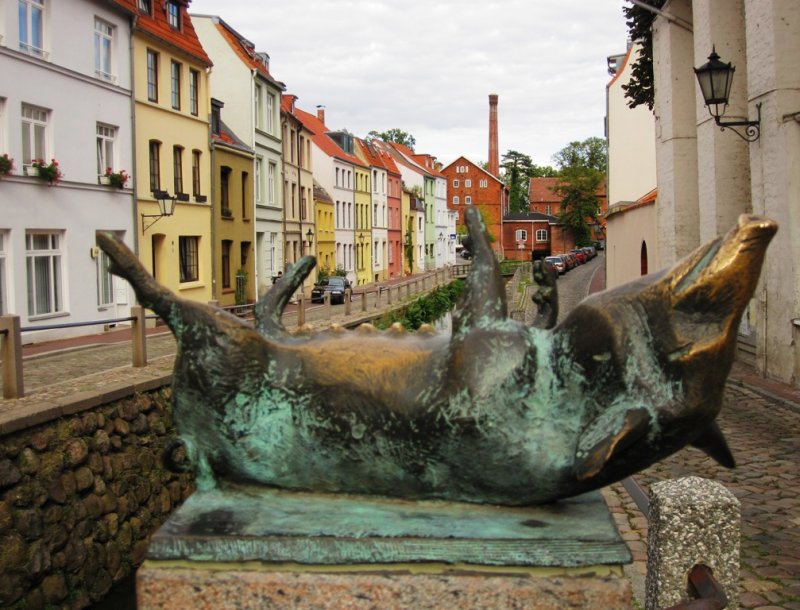 There was also a strange animal chapeau-ed man, who bore a slight resemblance to Mario from Super Mario Brothers. He seemed to be the town mascot and his bust (with varying animal hats) was prevalent. I'm still not sure what that was all about: 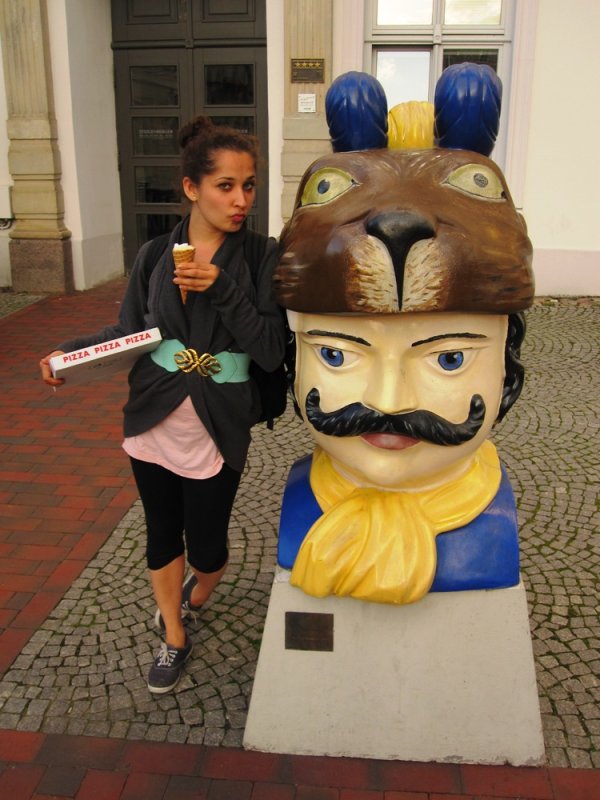 As you can see, we enjoyed some rather atypical German food (pizza and some amazing pistachio ice cream).

Since I wanted to see the water A. asked the tourist information woman where to go. She sent us to a small fishing village called Seebad Wendorf which was in greater Wismar. After about twenty minutes, we got off the bus and went towards the water. Here we found a sad little beach with the tide sucked out. If you kept your eyes to the left coast and watched the swans lazily bobbing in the water or only looked down at the tiny fish darting around the tidal pools it was all quite nice. The dock/pier was okay too: 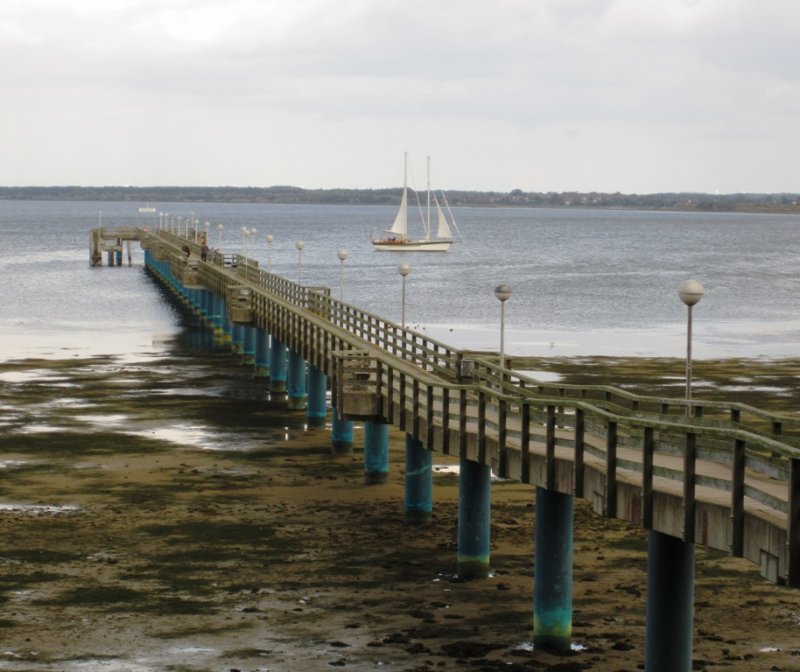 But to the right stood a factory pumping smoke into air and a huge cruise ship loomed (not visible). It all felt kind of pathetic. This was when A. astutely observed, “this is why all the German’s go to Croatia.” Here is why: 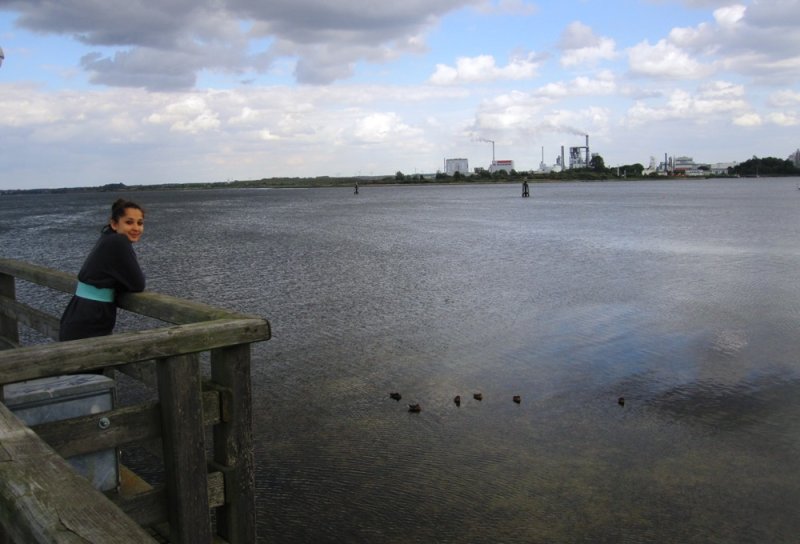 It's not so much that there was a factory near the water. That seems common enough. But the fact that the tourist information woman thought we should go all the way there seemed a bit odd. Was there really no better area where the land meets the Baltic? We returned to the town and wandered along the harbour, watching the fisherman in overalls bike past their boats. We walked up and down the streets pointing at buildings and discussing how different this place was from where we had come. But throughout our wandering I felt some nagging disappointment with my search for water.

That night we decided to find the real Baltic sea.

If you look at maps of Wismar you can see that it is quite sheltered in the Bay of Wismar. The fishing village we had gone to was still inland which explained its calm waters. What we decided to do was make a run for Poel, an island in the Baltic sea. Approximately forty-five minutes away from downtown Wismar, we took a bus to Poel early in the morning. It rained the entire bus ride there but when we arrived it began to clear up. I'm not sure pictures of the sea ever really turn out, they simply can't capture the vastness and the fresh salty air: 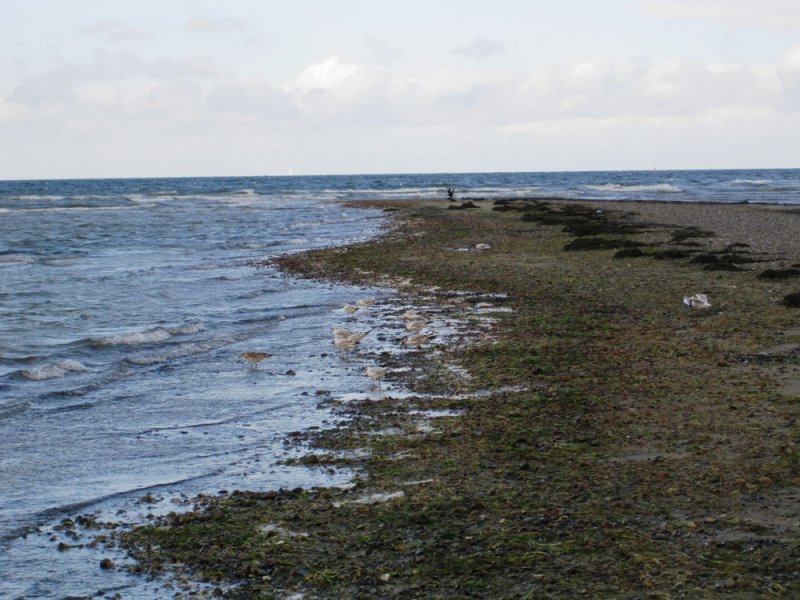 This was much more of what I was craving: 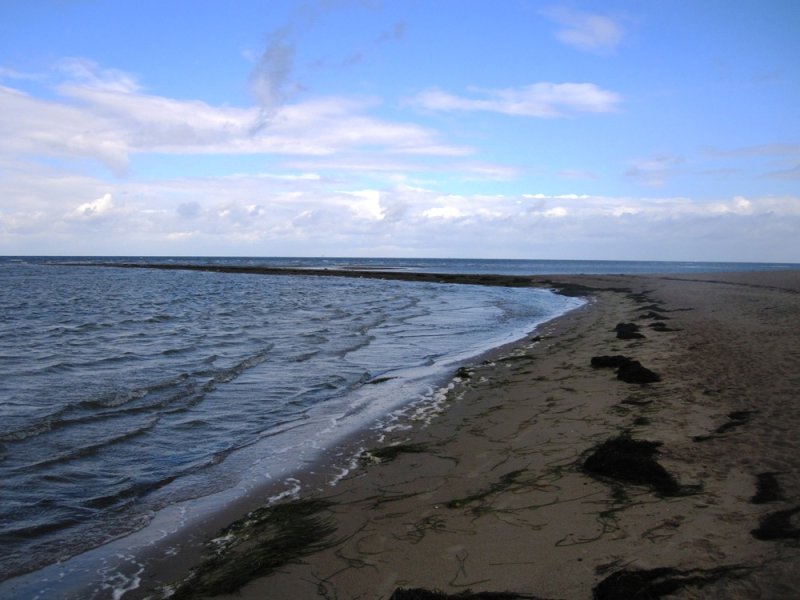 Here is A. determined to feel the water. As clearly illustrated by the clothes, it was not a hot August day: 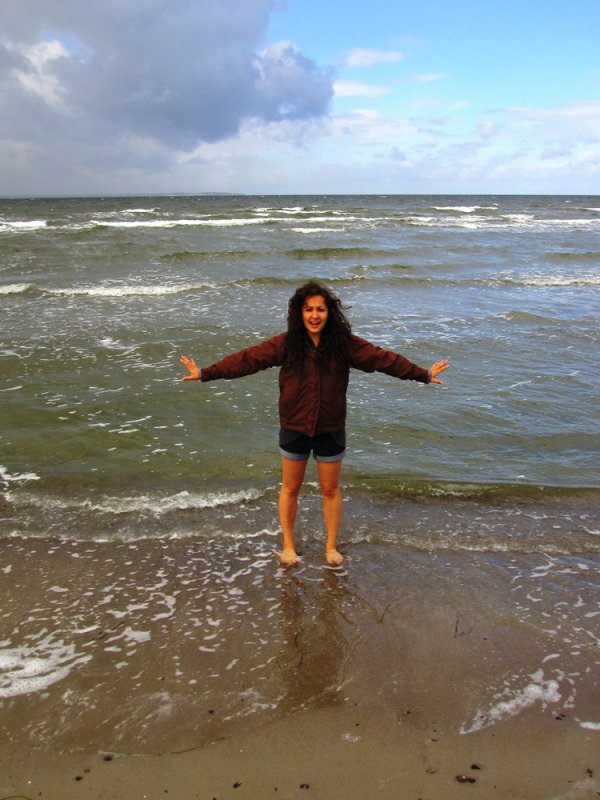 These are kind of like the equivalent of Brighton's beach huts, note how they are locked: 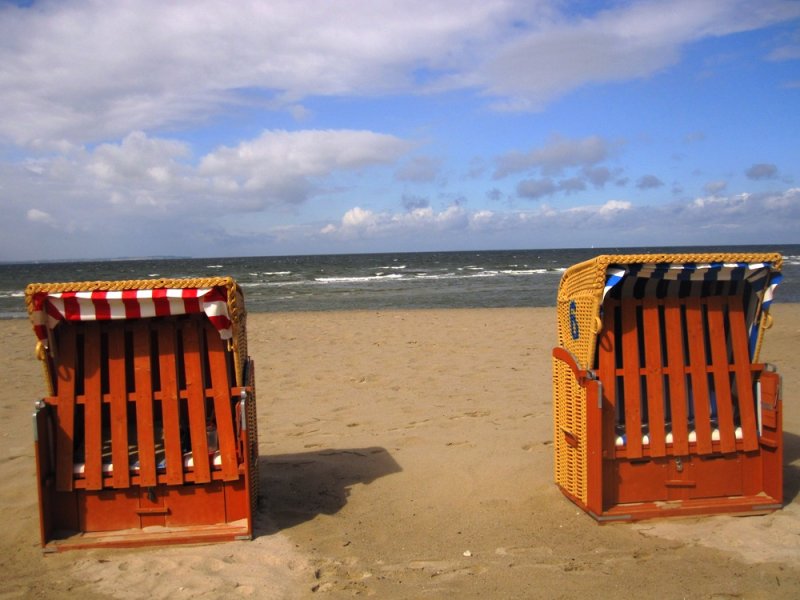 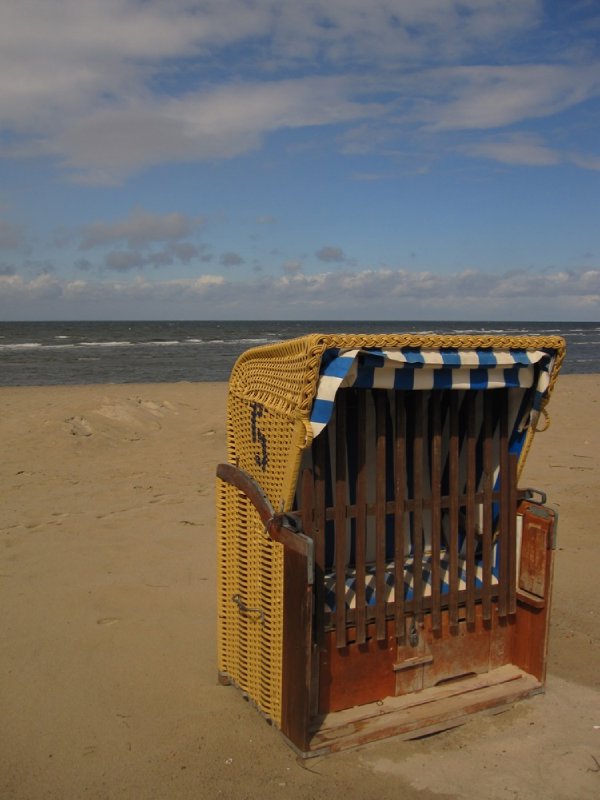 After my fill of the wind and sea we returned to Wismar. This was a view from the bus: 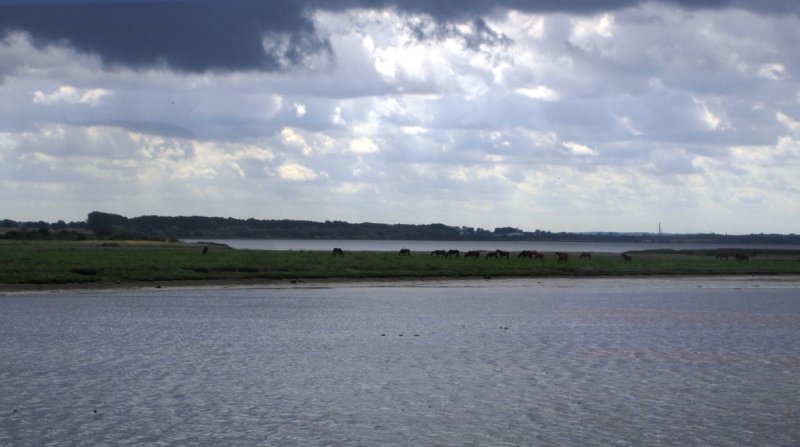 We caught a train south to Hamburg at noon. With a population of 1.8 million, Hamburg is the second largest city in Germany and the eight largest city in the European Union (EU). We were only in Hamburg for a few hours of sunlight and we didn't have a lot of time to prepare for the excursion with all the other chaos. This meant our tourism was fairly undirected. We just set out, following one sign after another, walking along the canals, and taking turns because we could. With so little time we just wanted a flavour.

The narrow alleys to the canals: 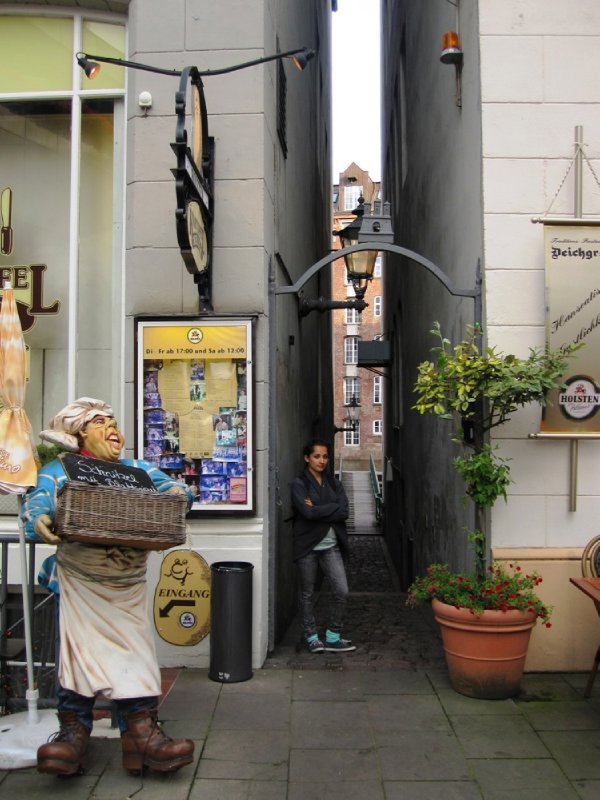 And here are the canals: 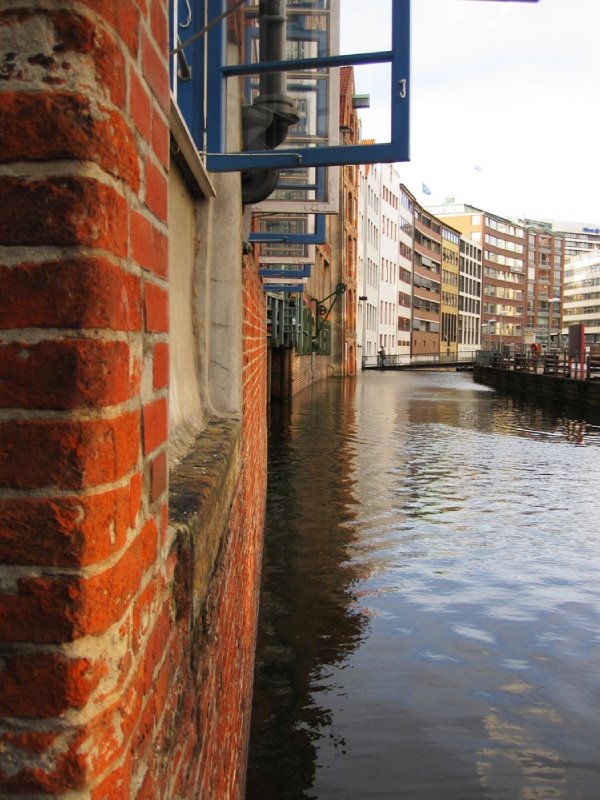 We walked along an elevated walkway, looking at the water and pointing at buildings. They say Hamburg has more bridges than Venice. There were certainly a lot. Here is me in A.'s sunglasses, I'm considering getting my own: 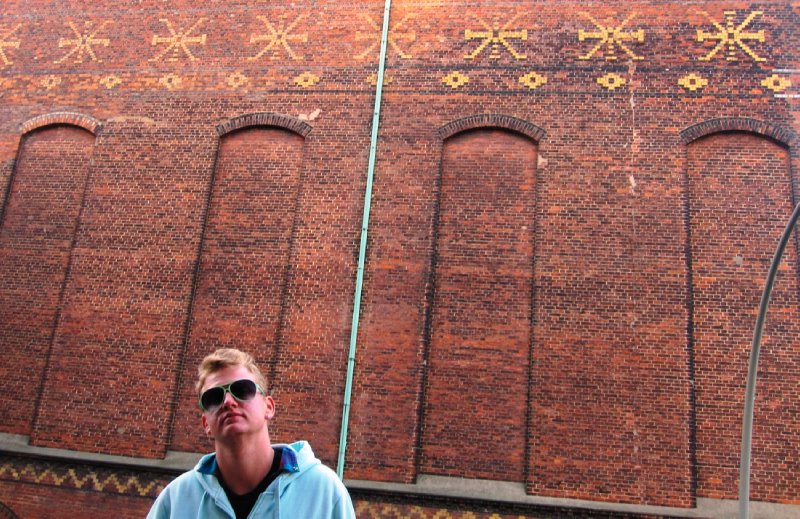 Hamburg is a living city and cranes dot the horizon. Perhaps it is not suffering economically the way Berlin is. And it's true that Hamburg seems more serious, like an older sibling with a good job. The harbour sprawls. Here is a silhouette of one of the prettier boats: 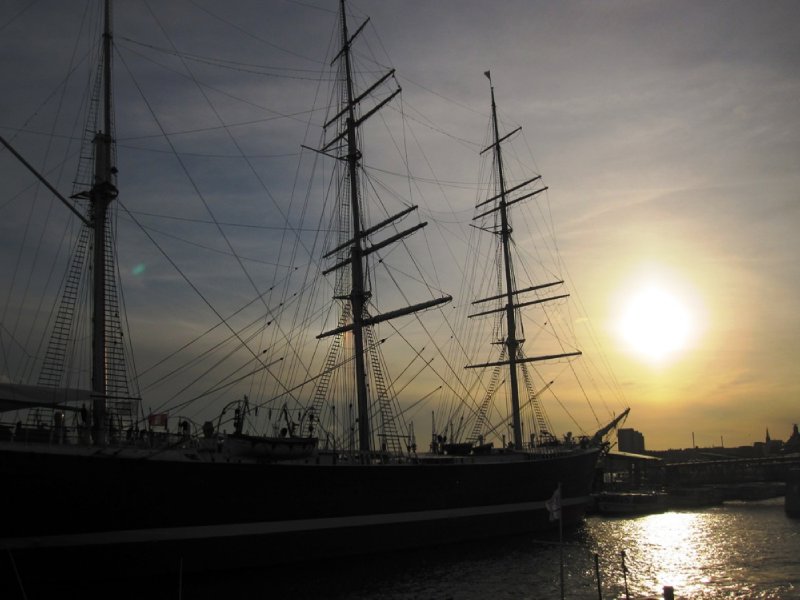 Our hotel was in the Reeperbahn, for those (like us) unfamiliar with this area, this pretty much sums it up: 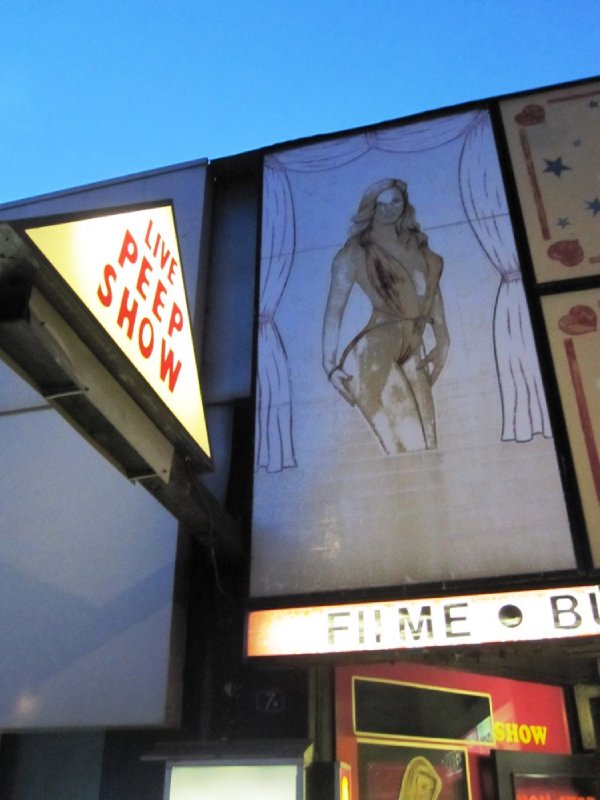 Apparently, the Germans call it die sündige Meile (the sinful mile). One of the biggest red light districts in Europe, the Reeperbahn is seedy entrepreneurialism at work. It's where pornography meets budget sex toys. We walked along the strip for a while, looking for cheap wine and dodging assholes who come out at night. For instance, six guys on a mobile contraption passed by on the street peddling sideways while drinking from kegs of beer through tubes and yelling. Fun.

As we crossed a road I looked up and spotted an ad. I blurted, "A. that looks like you!" And she agreed (minus eye colour): 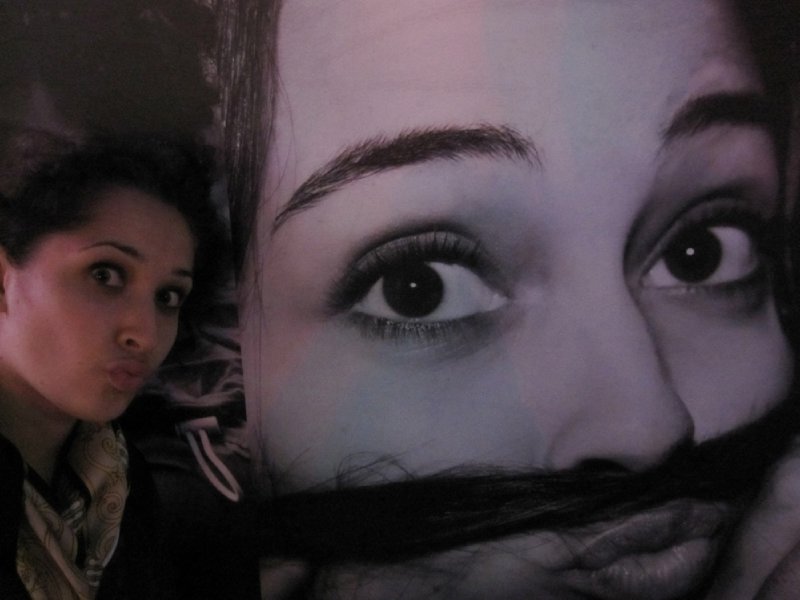 We left the Reeperbahn for the bright lights of the Hamburger DOM. Attracting nine million people a year, the DOM is one part funfair and one part beer festival. The flashing lights and vast array of sounds is entrancing, I felt sucked in: 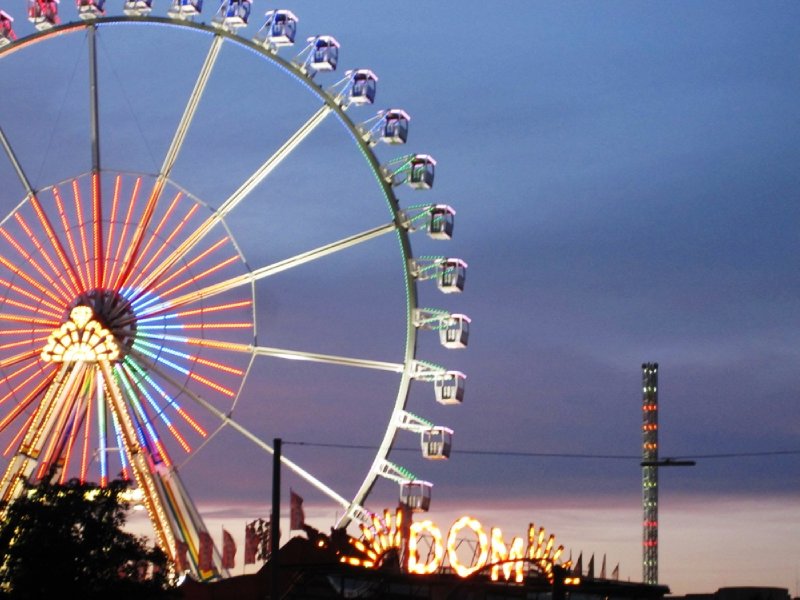 We walked past booth after booth and ride after ride. There was a lot of weird American memorabilia and seemed like a bizarro USA filtered through German eyes. Note the tediously bored expression of the carnie: 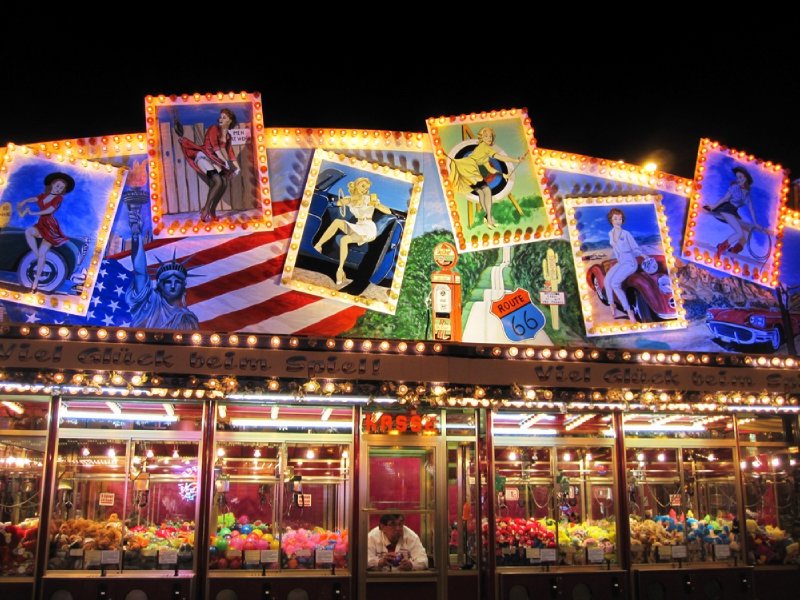 There is something about rollercoasters I find very appealing visually: 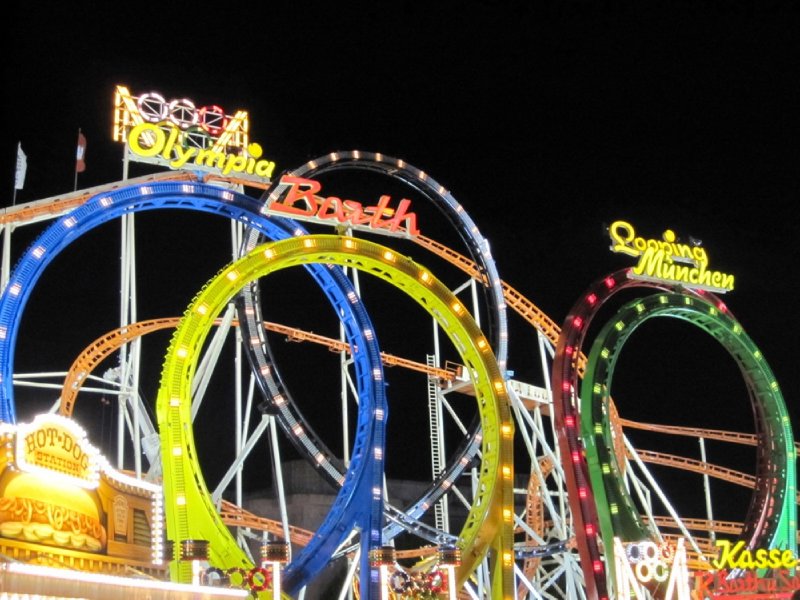 How creepy is this, "Mais man", what is he doing with his finger?: 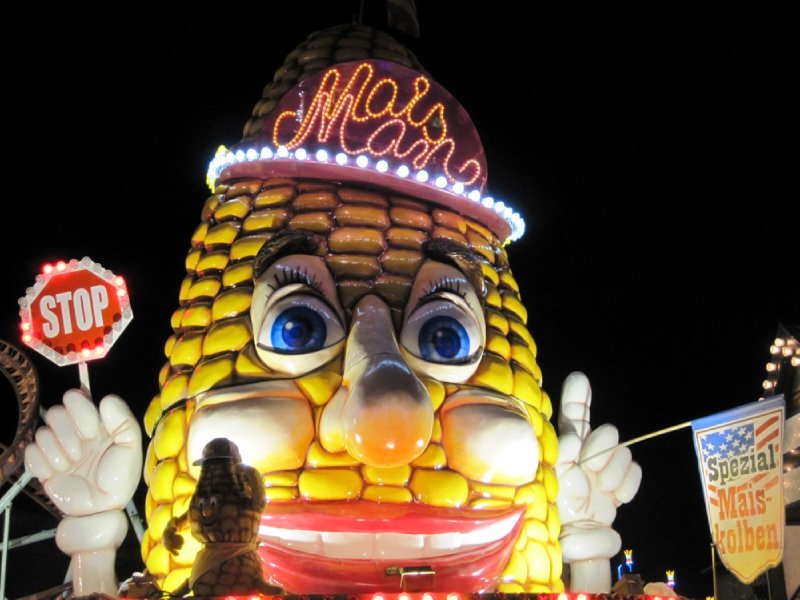 The next morning we boarded a train back to Calw to spend the remaining days with A.'s family. The trip was rough. We were shuffled from seat to seat and A. argued with rude Germans. We reached "home" frustrated and exhausted. Luckily, we had a few days to unwind and say goodbye to Germany. We packed up Tuesday morning and A.'s aunt drove us 2.5 hours to Frankfurt for the flight back to Toronto.

I've been home for a few days now and coming back to my family and friends has been so great. Tomorrow morning we get back 1.5 hours of the ones we lost as we head to St. Johns, Newfoundland.

It is likely that this is my last blog entry for a while as real life kicks in soon and I'm back with my primary audience. This blog has been such an excellent tool for me to stay connected and keep people updated about my adventures. Writing it has been both a positive and cathartic endeavour when chaos and distance seemed constant. So, thanks for reading! Until next time.