Calw: Home Away from Home

I’ve been in Germany for almost two weeks now but it has been quite busy and I have not had a chance to write. Time has slipped away from me and in less than one week I will be back in Toronto! When I think about it I am extremely excited to see my family and r & m. I am actually writing this as A. sleeps beside me in a hotel in Wismar, a tiny village in the north of Germany on the Baltic Sea. That update will have to wait...

When our train from Paris arrived in Stuttgart, a large town in the South-West of Germany, we were picked up by A.’s mom and uncle and whisked back to Wimberg. Forty-five minutes away from Stuttgart, Wimberg, with a population in the small thousands, is the village equivalent of a suburb of Calw. Calw (pop: 23,000 - including Wimberg) itself is no metropolitan hub, instead, it is a small village whose major claim to fame is that Herman Hesse was born here (me and A.'s brother leaning on the Hesse): 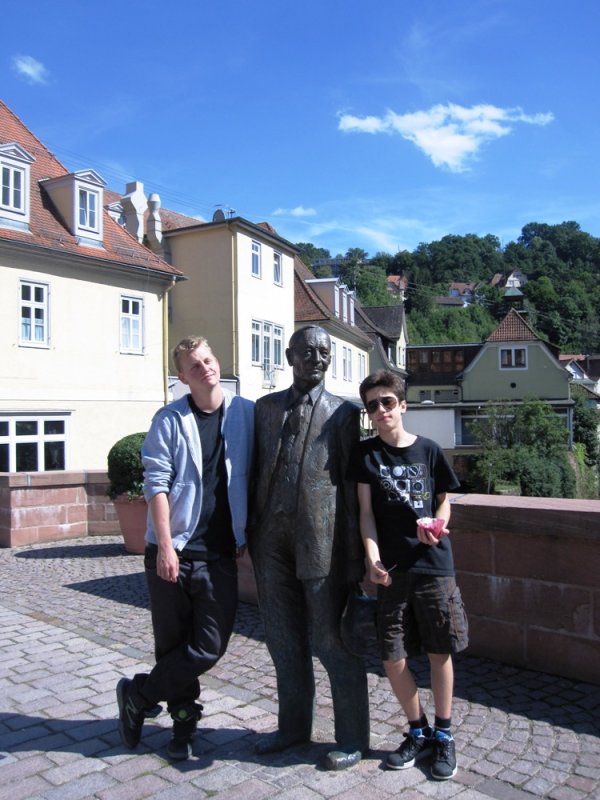 Unsurprisingly his face and text adorns the town. Calw is also marked by that distinctive German architecture from the 17th century that makes it absurdly quaint. People keep telling me the name of the building style in German which I promptly forget. For some reason it makes me think of Hansel and Gretel: 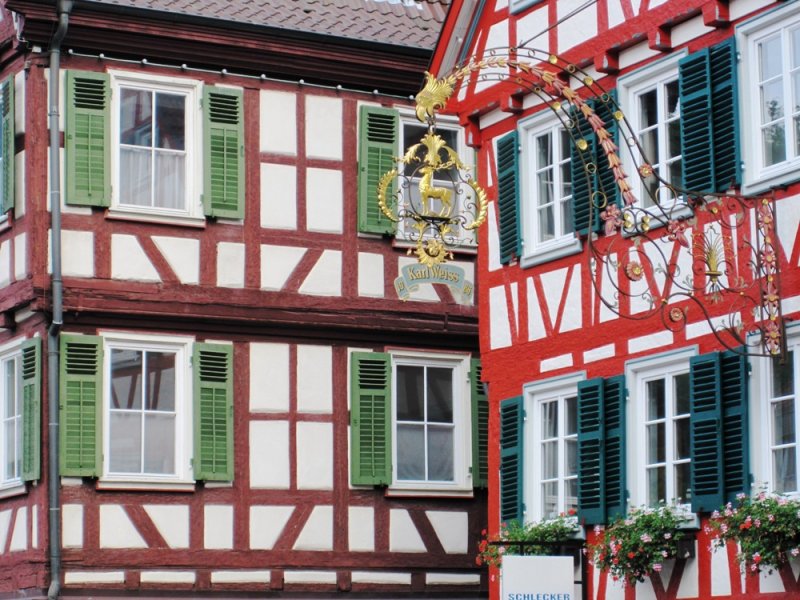 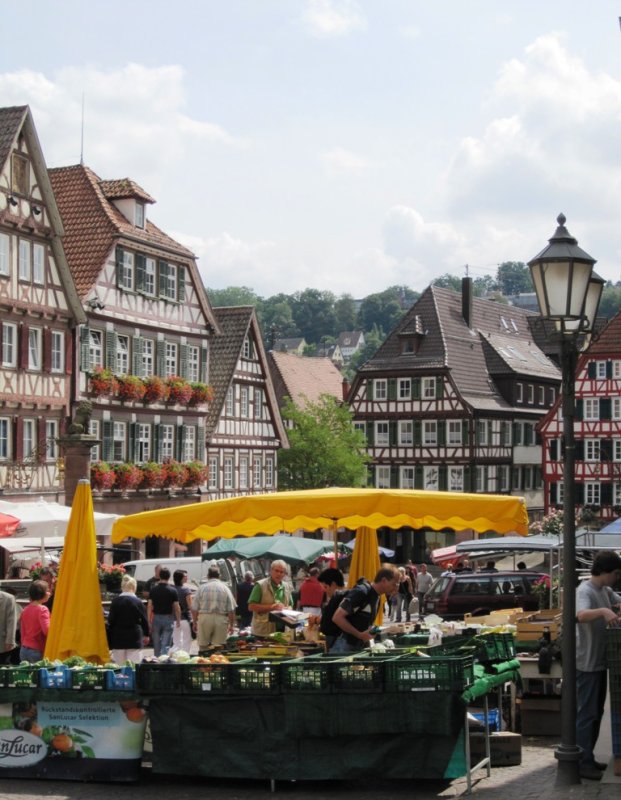 A. has a huge German family, including her grandfather, nine aunts/uncles and several cousins. I am staying in A.’s grandfather’s house which he built from the ground up. Across the front yard is another family home. In this complex alone there are six family members. I love being here even if I don’t understand anything. The rapid fire Schwebisch (a dialect of German) is incomprehensible, though I’ve already picked up infinitely more of it than I knew before. For instance, I can now say schmetterling (butterfly), schön (nice), schnecke (snail), nacktschnecke (slug- literally naked snail), wasser (water), meerschwein (guinea pig or the odd literal translation of 'ocean pig'), and genau (exactly). This is in addition to 'thank you' and the numbers 1-5. Luckily, A. is fluent so we don't depend on my German.

And while my lack of communication is disappointing it means I can watch. There is something really fascinating about being thrown into the middle of a family and given the opportunity to learn about A.’s history, relationships and internal dynamics. It’s so interesting to see how familial ties bind people together. I couldn’t understand before but now I’ve had a glimpse. Besides, when the German language became overwhelming I had A.’s siblings, J. & S., as my English buffers and A.’s mom who kindly took me in for the duration.

The Schwarzwald (Black Forest) is just minutes away and you can wander through the lush green. According to Wikipedia, "the name Schwarzwald, goes back to the Romans who referred to the thickly forested mountains there as Silva Nigra , i.e. "Black Forest," because the dense growth of conifers in the forest blocked out most of the light inside the forest." This is not a wild forest, you are always mere kilometers from the next town. But it is beautiful (S. took this one): 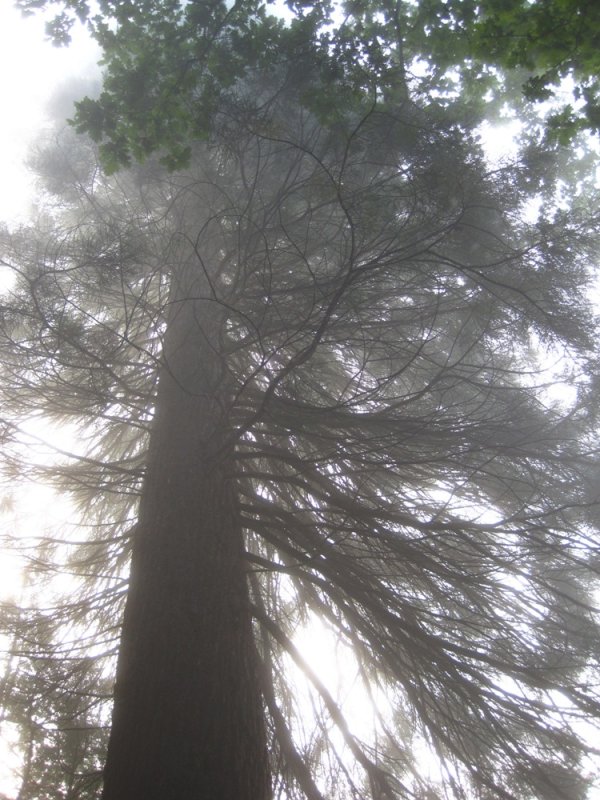 Here are the wildschweine or “wild” boars: 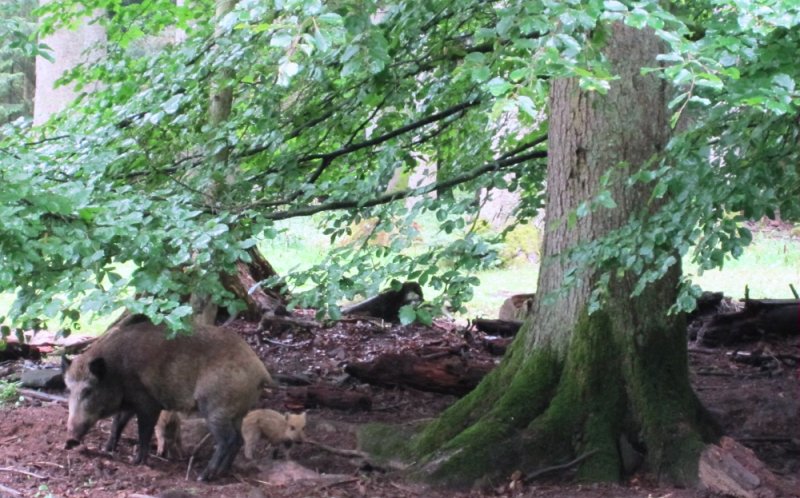 I also had the privilege of taking family walks, for instance to what they dubbed the Heidiwise, where farm meets forest: 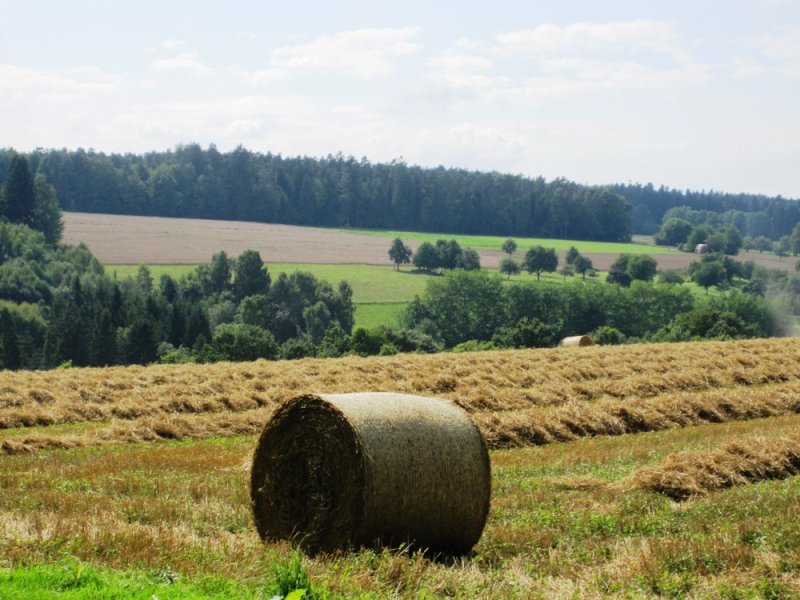 After three months of cooking for myself and two weeks of traveling around, I was desperate for a delicious home cooked meal. J., A.’s 14 year-old brother said, “everything tastes better in Germany.” He’s right. This includes freshly baked breads that are chewy and topped with seeds, chocolate of every stripe and sausages. The German’s are known for their sausages and there is a reason why. The day I arrived I roasted one on an open fire at A.’s mom’s friends’ house and it was divine. The Germans also take their brezeln (aka large doughy pretzels) seriously, here is a golden one: 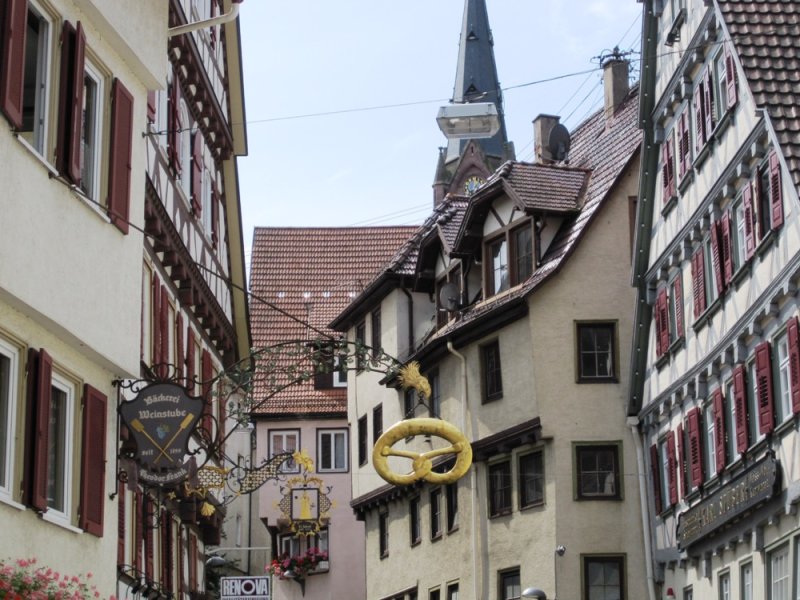 A. says the food obsession includes the dairy from cream cheese to the whipping cream and all the stinky cheeses in between.

One day A.’s uncles took us for a day trip deeper into the forest where we visited an old German castle (Schloss Glatt). Black Forest myth has it that the, “the cakes are so big you can’t finish them.” We had a cherry pie that seriously reminded me of grandma’s plum cake. We did manage to finish it though. This is me with A. and S. in the courtyard: 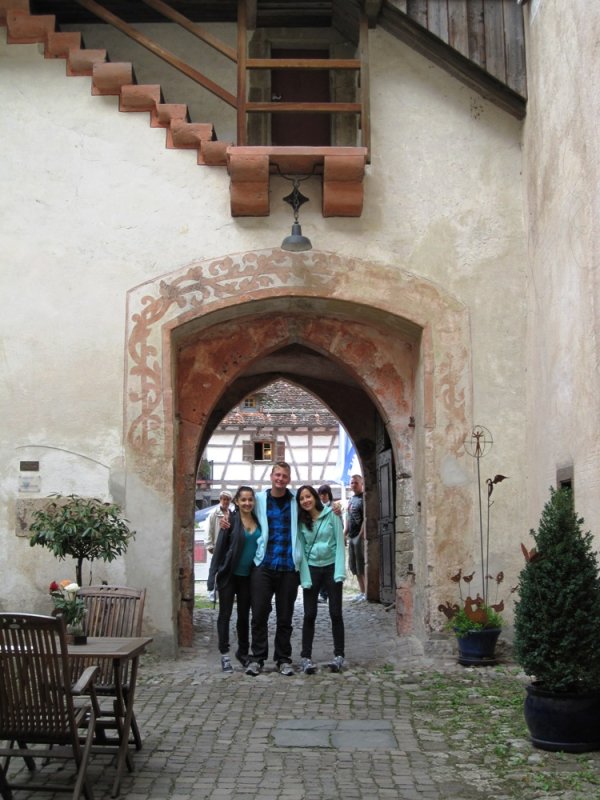 This is the inside of a nice box in the castle museum, I just liked the picture: 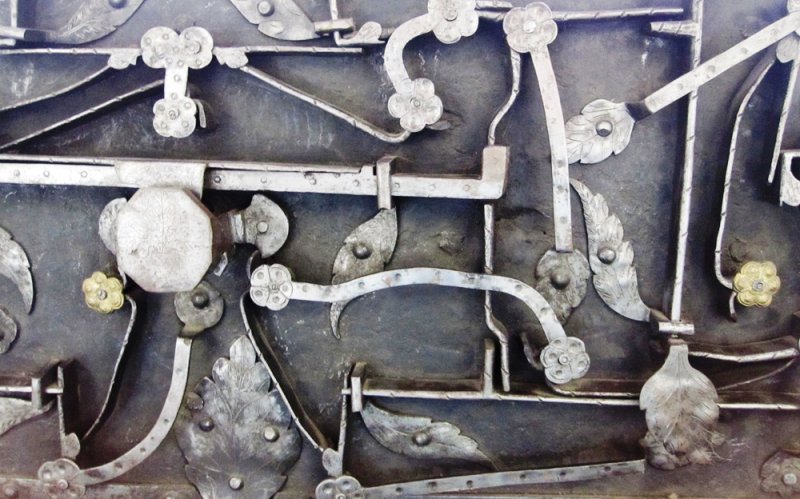 After the castle they took us to a lookout where you can see France. Sadly, fog descended in a thick cover. So, no France. But it was surprising (or perhaps not if you trade in stereotypes) to see how many Germans were still out hiking in the rain and fog (ourselves included): 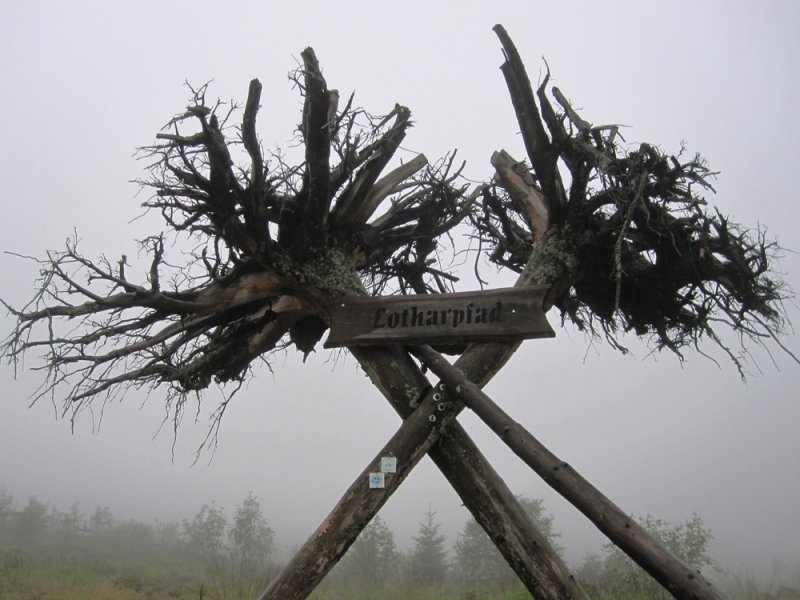 We also stopped at Der Mummelsee, one of the rare Black Forest lakes. Here we ate a traditional Schwebisch lunch of sausages and bacon with a fried egg on top (kind of like Portugal). We also managed to continue the Brighton tradition. Clearly I am the Mummelsee: 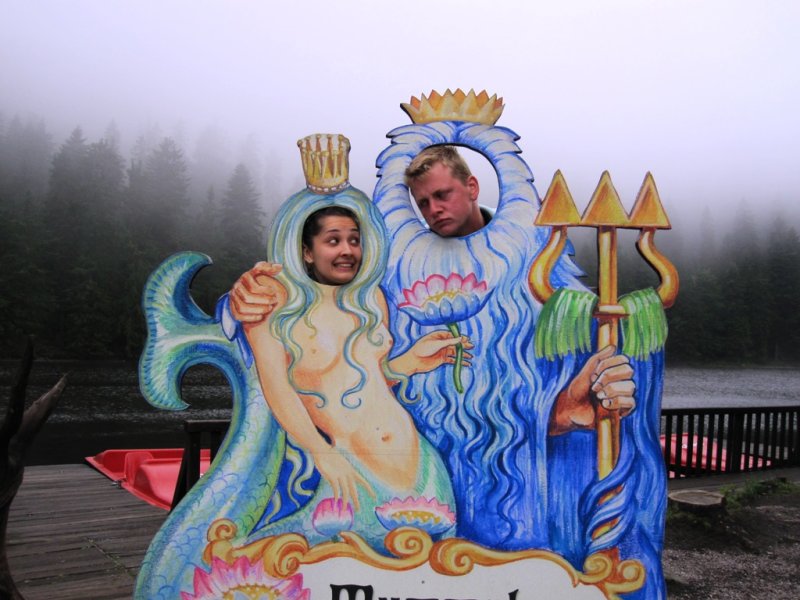 On our way home the fog lifted and we got this amazing view of the Black Forest and the mountains beyond: 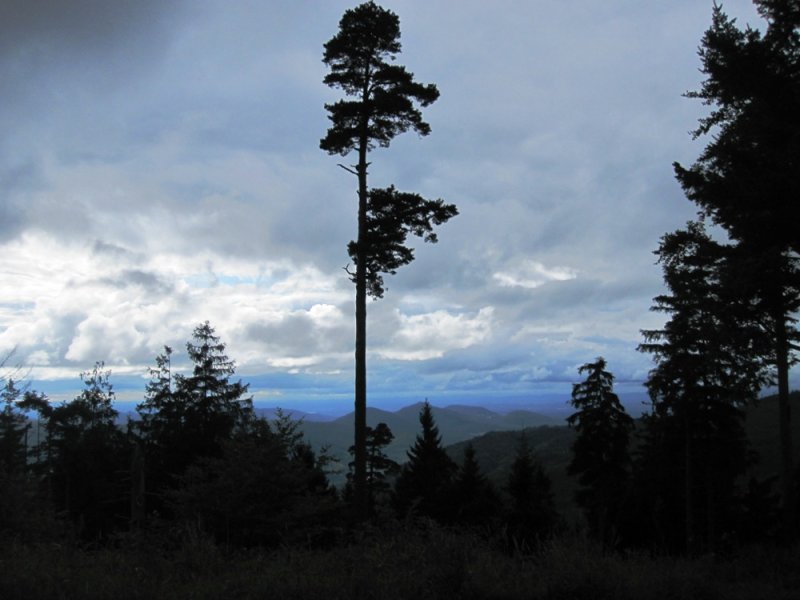 We took another day trip to Heidelberg which ended up being an epic family adventure which included getting off at the wrong stop and walking to the next one. One of the big cities in this area (pop:145, 000) it was once the center of Romantik (Romanticism) in Germany. Unfortunately, it also has an ugly Nazi history (a veritable stronghold of Nazism before and during WWII), Heidelberg has tried to clean up its image. Nowadays it is where you can buy your big city fashion from H & M and other boutiques. We went shopping and hiked up the hill to the looming castle: 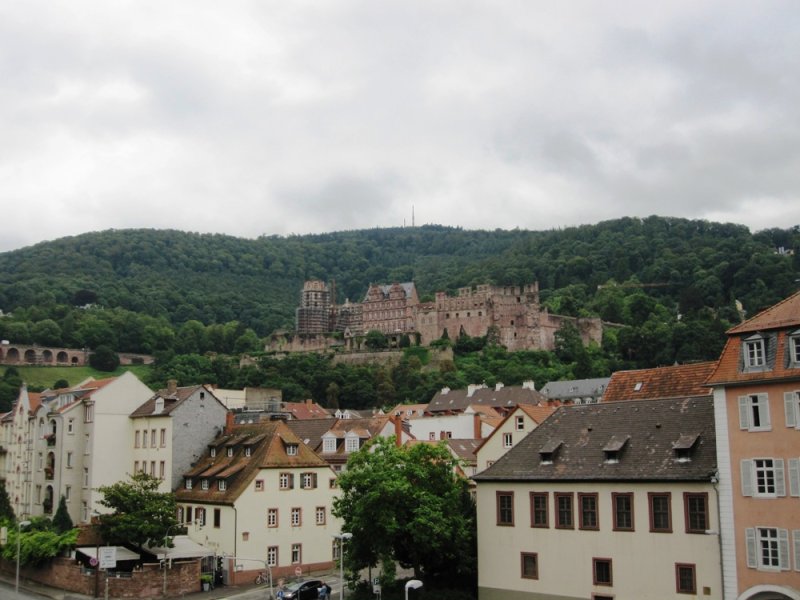 Here is the view from the castle walls: 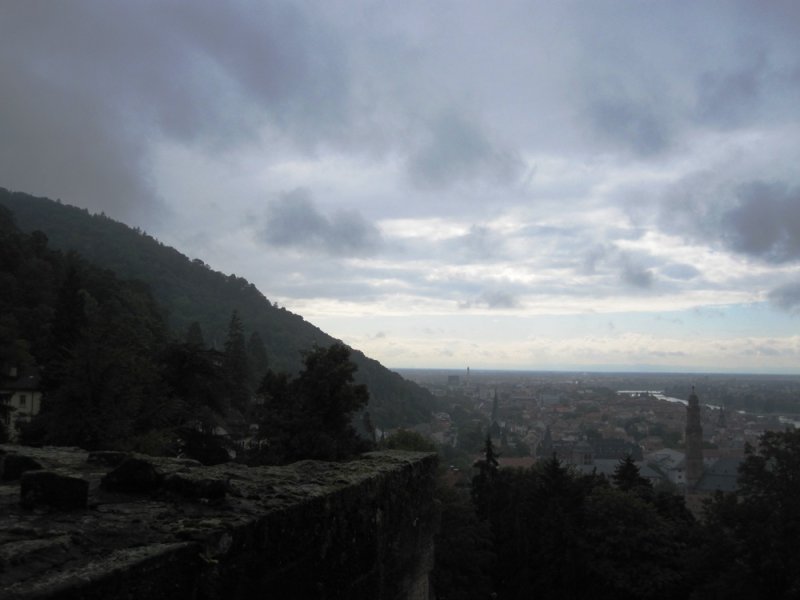 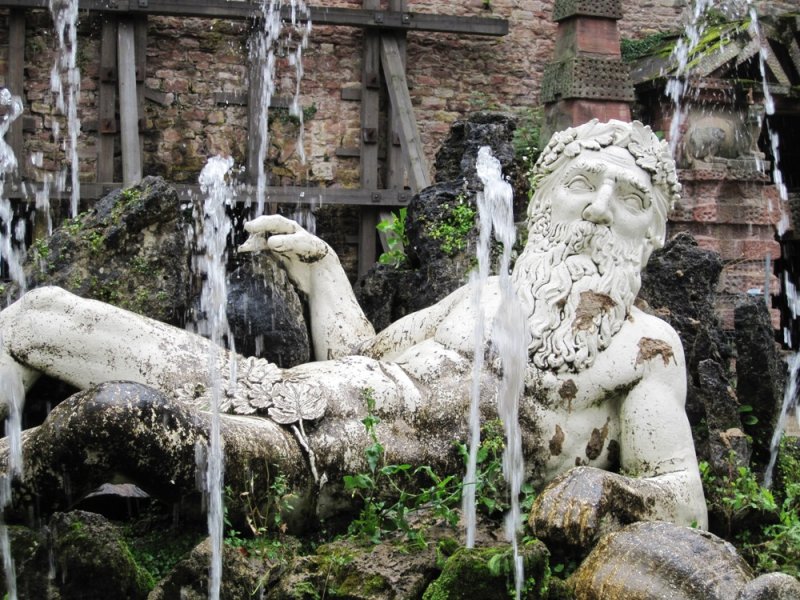 We returned late and began preparation for our trip to Berlin.

My time in Wimberg was divided between family adventures with A. and the final paper for my MPH that had been hanging over my head for months. I tried to complete it before arriving in Germany but A. and traveling had left me busy and distracted. Nonetheless, I finally finished and submitted it from Calw just days before we left for Berlin. Finished! I am officially a Master.

Previous Next Table of contents